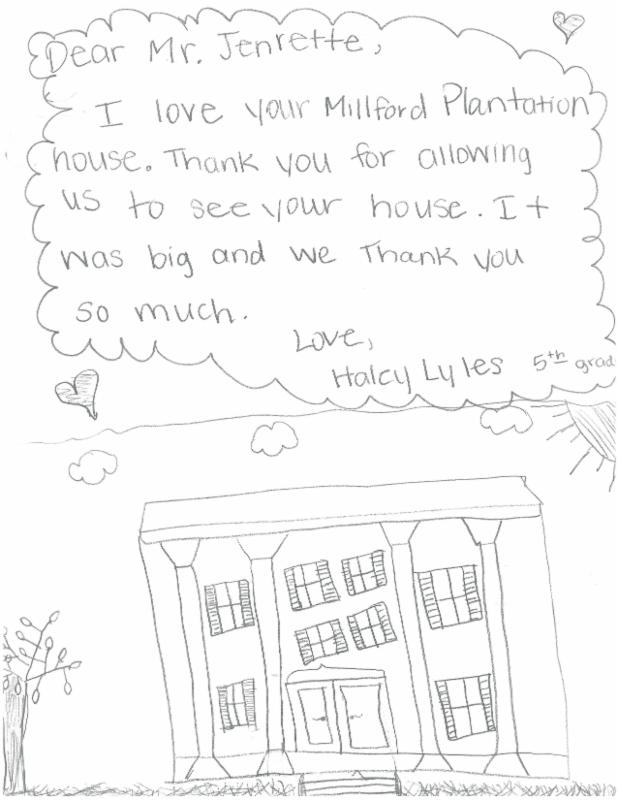 “No matter how long the winter, spring is sure to follow.” (Proverb from Guinea)

With spring comes a change in the rhythm of our tour season, as we welcome many patrons to each of the historic houses, who come also to enjoy the warmer weather, the gardens and scenic landscapes associated with each home. We began our traditional spring tour season with each of the properties being quite active. At Millford Plantation, we greeted Friends of the Owens-Thomas House from Savannah for a tour and box lunch, and the following day we also hosted them at the Roper House. So far, they have visited three of the seven properties as they recently also visited Edgewater. The night before the group’s visit, the members of the Aspen Institute‘s Globalization Seminar reserved the Roper House for their final evening in Charleston.

This spring season Millford also was the destination for two middle school class visits from The Lee Central Middle School in Bishopville, and returning for a third consecutive year was the Laurence Manning Academy from Manning. All in all, Louie Hall, Millford’s site supervisor, greeted over 125 students and also wore the hat of a middle school social studies teacher. We hope that a few future art historians, curators and preservationists were among this group of spirited and inquisitive boys and girls! Soon after, Louie greeted members of the Coastal Carolina University‘s Adult Degree Program of Lifelong Learners. The Roper House was also the destination for two cocktail receptions for the Charleston Art & Antiques Forum and the North Carolina Museum of History Associates. From young students to established professionals, our visitors came to both South Carolina houses for enriching and memorable experiences.

The Octagon Library at Edgewater, along the Hudson River, New York.

We next greeted members of the Board of Trustees from the Carnegie Museums of Pittsburgh and the Rotch-Jones-Duff House and Garden Museum from New Bedford, Massachusetts at the Roper House. After visiting Edgewater last fall, the RDJ House and Garden Museum decided they wanted to visit another home, and chose Roper House as their next destination.

In the beginning of April, the Roper House continued to be part of the East Battery Tour for the Historic Charleston Foundation’s 68th Annual Festival of Houses & Gardens, which is always a sell-out.

Georgia Botanical Advisory Board in the Dining Room at Edgewater, New York.

Most of CAHPT’s springtime activity takes place at Millford Plantation and the Roper House. However, Margize Howell and Peter Kenny welcomed members of the Nantucket Preservation Trust to the Baker House in New York City for a cocktail reception in April. Also, by mid-May, Edgewater received its first three tour groups of the spring season as our team welcomed the Morris Museum from Morristown, New Jersey, and the Delmar Progress Club of Slingerlands, New York, and the Advisory Board of the Georgia Botanical Garden.

As Henry James once wrote, Summer afternoon, summer afternoon; to me those have always been the two most beautiful words in the English language. These words certainly ring true to us, as we have the added pleasure of welcoming many groups and individuals to our homes during the upcoming summer months. Won’t you join us for a tour too? Click here to request a tour.

Return to the Spring/Summer Newsletter.